Its quite cliché isn’t it? A couple of fellas that love a frothie or two and that’s where the story begins…

So we thought we’d share a bit of this whole story and how it began!

Dan is a marketing extraordinaire and a freelance photographer that loves having a beer in a felt hat.

Tom works in radio and has a degree in Journalism and Digital Marketing to boot. Normally has his hair up in a man bun but doesn’t mind letting it down at times.

That’s how we came up with the logo, we’ll let you work out who’s who!

We only met a few days prior to creating Beer Boys ADL. We happened to be on the same trip in Port Lincoln, which is where this whole idea came about… Two like-minded lads craving frothies and adventures.

We had a large night at the local pub and wondered how we hadn’t ever met before! (Cute right?). With a 6am start the following morning, in hindsight it probably wasn’t the best idea, but of course it felt like a great idea at the time! 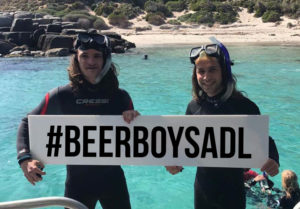 So running on 3 hours sleep we were on a boat in Port Lincoln heading out to Neptune Island to see some Great White Sharks. Feeling dusty as anything on some rough waters, we found the best remedy to seasickness was to get back on the beers.

Aboard the boat was a supply of Australian beers – not that we were complaining! So we decided to work our way around the country as best possible. We started in Queensland with a XXXX Gold and worked our way down the coast. Our second stop was New South Wales, with a Tooheys New. Then making our way closer to home it was time to stop in Victoria with a VB. Finally, we made it home with a cheeky West End but that wasn’t the end of the trip! We made our way around to Western Australia for a Little Creatures can.

So like all good ideas, Beer Boys ADL was sparked by the magic of beer!

We’re all about creating experiences and capturing the moments and good times that come along with beers and getting our community involved in every way possible.

So stay tuned, tell ya friends and lets get frothie!